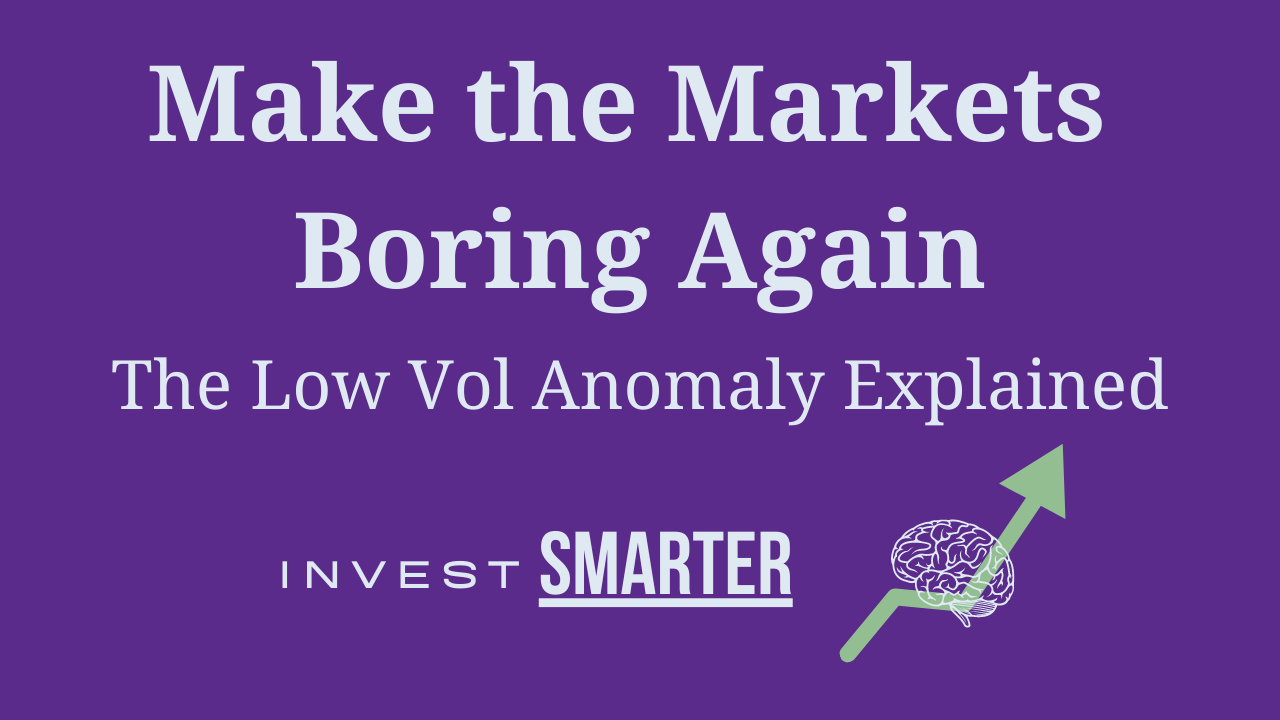 What is the low-volatility anomaly?

Between 1970 and 2011, the lowest quintile of stocks ranked by volatility did over 12% annually, while the highest quintile did less than 6%. 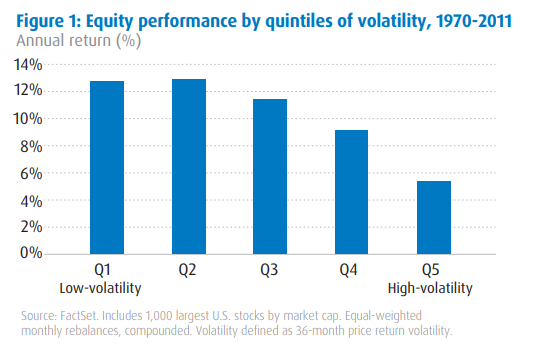 The same story goes for Sharpe ratios, which is a risk-adjusted return. 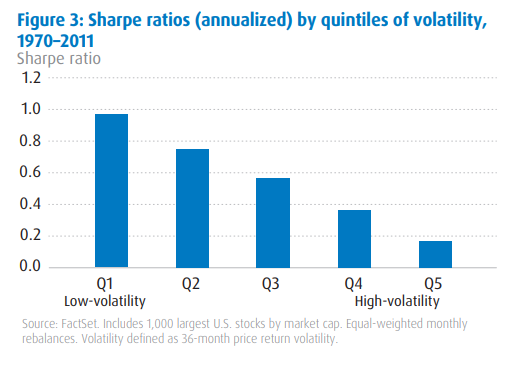 It goes against conventional wisdom based on the capital asset pricing model (CAPM). This model has been widely accepted.

Just because a stock is volatile does not mean it is high beta, however. For instance, Amazon used to be a low beta stock when it was smaller, like in 2010 a beta of .7, because its return day today was more related to idiosyncratic factors as opposed to the broad markets general feelings and macro factors.

But low volatility strategies want the overall portfolio volatility to be low, so theoretically you could have a portfolio of ten highly volatile stocks, but so long as their movement relative to each other is offset, the portfolio itself may be boring and considered low vol.

So why has investing in low volatility stocks, or stocks with a beta less than 1, meaning the expected return should theoretically be less than the market’s return, be outperforming the market? It just goes against a widely accepted theoretical model. But maybe the problem is theoretical, mathematical models are just not always good at explaining the intricate realities of human life and behavior. So let’s think about some reasons why this anomaly is present in the real world.

And the answer likely lies in just that...human behavior. Yeah, we think we are rational, and economics 101 says consumers act rationally, but maybe what we are really good at is rationalizing our decisions.  According to the Bank of Montreal research,

“Researchers have extensively documented cognitive errors made by investors. The errors are predictable because they are rooted in psychological traits that are common to most human beings. Among these are an overreaction, overconfidence, optimism, anchoring (the idea that a stock knows what you paid for it), and pathological loss aversion.”

So how can these traits make it theoretically possible that low volatility stocks do better over time?

Overreacting. Investors overreact to good or bad news and cause a stock to get overbought or oversold until it settles back at some happy medium. A stock may overreact to good news for a long time as well, and investors that get in during the overreaction period will set themselves up for a wild ride, likely stirring up more emotions.

Optimism bias. when you hold a perpetually underperforming stock but always believe the turnaround is just around the corner.

Anchoring. You finally decide to pull the trigger on a stock you like after it keeps going up. You pay 50 bucks. Then it’s 30 bucks, and you feel personally attacked by the company. You get all flustered and end up selling when you break even. You viewed the price you paid as something very important to you and not an arbitrary point in time where the stock happened to be at that level for whatever random function of the market was in control.

Loss Aversion. You get out at 50 to avoid a loss. But if it took you a year to get back to even, you lost a year of your time so it wasn’t really breakeven. Losing hurts a lot more than winning brings pleasure, especially in the short term.

All of these reasons don’t necessarily explain why low volatile stocks have done better over time- these emotions and biases can certainly be present when investing in low volatility stocks--- but I would argue at a far lower magnitude.

It’s pretty much a fact that retail investors are attracted to stocks with lottery-like characteristics, AKA very volatile stocks. So add up all of these and what you see is glamorous, sensationalist media-driven stocks get overpriced and then underpriced all the time with rallies that crash and crashes that rally. But still, I’m not sure if this alone is enough to explain the low vol anomaly and BMO research agrees with me. They say they’d be much more confident investing in low vol stocks “ if we can find additional explanations that go beyond investor psychology. We’d prefer to see the anomaly anchored in more powerful “institutional arrangements,” where people are motivated by incentives or other powerful forces to make decisions that are irrational on the surface, but that is more rational when the institutional context is considered.”

They continue “When financial economists find a significant anomaly that persists over long periods of time, they tend to look for institutional arrangements as a possible source of the anomaly. After all, if a large enough group of people has an incentive to behave in a way, which appears irrational to others but is rational to them because of the incentive, they will do so — and push prices around, predictably, in such a way that other investors can trade profitably against them.”

So what do we see here? A compelling 2011 hypothesis may hold the answer.

And it’s simple. There's a prevalent compensation schedule for professional money managers whereby they are paid a base plus bonus for good performance. If they only invested in low volatility, their odds of a big bonus are low. Like in this graph provided by BMO, the wide probability distribution is the volatile portfolio, so the probability of a big bonus is a LOT more than 0. Of course, it goes both ways, but it pushes managers up the risk curve.

BMO does mention that the absolute amount of money managed in this way is somewhat small, they mentioned that even managers who do not work for an explicit performance fee, as more assets under management still increase revenue and the manager will be presumably be rewarded.

The most fascinating aspect from this report that suggests why low volatility stocks are perpetually ignored by pros is that “because of the relationship between a stock’s return and its alpha and beta, it turns out that, in order to outperform a rising market, the minimum alpha required by a high beta stock is actually negative compared to the minimum alpha, always positive, required by a low beta stock.”

In other words, in a rising market, managers are incentivized to overweight low-quality stocks that have underperformed, AKA that may have negative alpha (which is return above a benchmark) and underweight stocks they know they should like from a quality perspective. So simply put, they are incentivized to be overweight low quality, and underweight high quality. In a big bull market, the high-quality stocks would have not been hurt as badly in the bear market, thus theoretically have less room to go up as opposed to lower quality, perhaps more economically sensitive stocks that have a lot more room to run to catch up.

So what is the point of all this? Yeah, there is this anomaly where low-volatility has outperformed over time. Because I guess in reality no one, that is a human at least, truly loves to win “slowly”. But it works. It really does, cause when you remove the odds of getting emotional, you make better decisions, and with investing, that’s usually making no decisions.

But if low vol is so good at making money, won’t it get arbitraged away? In other words, won’t humans get greedy and buy up at the low vol products and overprice them, eliminating this anomaly once and for all?

Probably not, not yet at least. Low vol is not a crowded trade, for one. Yeah, there are a lot more products, but the total money flowing to them is negligible compared to the continued move to cap-weighted index funds (where a lot of these problems start from).

Or will humans stop acting irrationally in their investment decisions? Ehhhh. I agree with BMOs take here- as long as humans are ruled by fear greed and other emotions, and trade on incomplete information, they don’t think analysts that pick stocks will ever be put out of business.

And if you can actually get behind the idea that your low vol portfolio may actually make you more money over the long term, then you are setting yourself up for success. Cause when the market has a really bad year, you might not be thinking to yourself how the heck do I get back to even. you may actually still be quite excited about future returns. The ride can be smoother as well as more bountiful.

Here is the BMO Research used in this article:

Was the Market's Reaction to the Vaccine News Justified?

Stock Market Valuations Are Too High. Says Who?

Everybody seems to be trying to figure out this equity market by looking at what happened in the...

Working out more, prioritizing self-care, and spending less time on your devices are all great...